Good morning, y’all. Rain, rain, don’t go away, but give us a chance to catch our breath. The recent rains have given life to our dormant bug population, mosquitoes in particular. I hate to get the bug guy out here to spray the park. I suspect the commercial foggers have something to do with our children’s low test scores.

While repairing our new tenant’s “throne” yesterday, I happen to hear a CNN report about the Queen of England now surpassing the record for the most time on her “throne”. As always, when I hear anything about the “royal” family, I thought, who cares? Didn’t we fight a war to be free of having to worry about the precious “royal” family? In fact, we fought two wars to not have to be concerned about the comings and goings of some inbred yahoos. 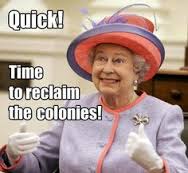 Take a look at the current winner of the conception lottery. Through no fault of her own, the current queen inherited wealth, power, and servitude from peoples scattered all over the globe. Peoples scattered all over the world, because that used to be the family business for the royals, exploit others. At the peak of its power, “the empire on which the sun never sets”, controlled over one fifth of the world’s population.

The “family” business was full time world domination. Whole countries were laid waste to provide materials to keep England’s war machine humming. Ireland, the “Emerald Isle” was almost completely clear cut to provide England with wood for ship building and gunpowder. England’s desire to gather up all of the world’s treasures and hide them in the Tower of London was insatiable. England set up colonies from Australia to Africa and was responsible for bringing the slave trade to America. And the queen spake, “Let no moral go uncompromised in your quest to bring me riches”.

Think of it, a country smaller than Alabama was the dominant power in the world. If that concept doesn’t blow your mind, think about randomly picking any Fred and Ethel out of the local Walmart and elevating them to the rank of King and Queen. Compound your error by ensuring that only Fred and Ethel’s progeny would rise to the throne. No matter how harelipped, wall eyed, or feeble minded the lineage might become, they were guaranteed a life of privilege and power.

This life of privilege and power was sanctioned by various religions entities granting to the “royals” the concept of “Divine Right”. Divine Right says that the “royals” answer to no earthly being, but only to the higher power. Sort of like our Supreme Court. Unlike our Supreme Court, when a “royal” dies in office, he is replaced with a family member. The current line of “royals” goes back hundreds of years and is one of the last monarchies on Earth. The fact that the British people continue this tradition is more a proof of Stockholm syndrome than anything else.

In my mind, just because something’s old doesn’t mean you keep it around, Mulva excepted. No matter how comfortable you get with a pair of shoes, eventually you need to trade them in. Trading those old shoes for a new brand might just put a new spring in your step. I think England ought to give that a try. They have the facade of a democratic government working behind the scenes now. They just need to cut the cord and stop seeking the Queen’s approval on everything. Parliament should divide up all of the royal property through eminent domain and turn the palaces into tourist attractions. The royals can keep what they can carry out in a 40 gallon garbage bag, and they have to carry the bag themselves. Everything else goes to auction. Pseudo public land like Hyde Park should actually become public land. Then the public wouldn’t have to endure a travesty like the one outlined here.

Send Invite To Join In