Good morning, y’all. It’s hard in some respects to be oriented to the world in general based off of my current situation. I guess one would say my small world got smaller, so I was kind of shocked to find out I was the only one at TackyToo who didn’t know today was Labor Day. For the rest of you, Happy Day Off!

I guess I’m presuming that you got the day off. I know a lot of businesses have felt a moral imperative to not create an inconvenience for their customers by closing on Labor Day. To those of you who are working this day for one of these socially aware businesses, let me say, I hope you find something better between now and next Labor Day. Folks need more days off, and in my mind a day off is a small thing to say “thank you” to the ones that “brung you”. The world may all be robots some day, it seems like we’re working in that direction, but until then, the bosses should be happy to say a thank you with a day off for the people in the trenches.

Speaking of the trenches puts me in mind of the times my parents used to talk about so much, The Great Depression. For those of you who learned history from books approved by the Texas Board of Education, “Great” does not mean fun, fabulous, an opportune time to make money. “Great” in this contexts mean all encompassing. During the Great Depression, unemployment rose to 25% and there was no social safety net underneath to catch people before they fell into total ruin. Farm prices fell by as much as 60% and construction was non-existent. If you had a farm you could at least feed your family, and perhaps barter for the other things you needed. Unfortunately, there are things in life like taxes that require cash, and that was a real problem. Men would travel far and wide to look for cash jobs while leaving their families back on the farm to keep things together there. Such was the case for my Grandpa Lite who followed my great granddaddy Waller into the mines in Copperhill, Tn.

Everybody in the area has heard the old joke about the traveling salesman that was traveling by bus from Asheville to Chattanooga and woke up as they were coming into Copperhill. The story goes he fell into a fit of crying and wailing when he looked out the window because he thought he died and ended up in Hell.

If you’ve never been to Copperhill, Tennessee, let me recommend you make the trip 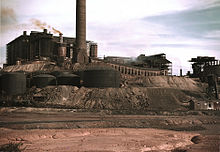 . It is a perfect example of how industry will completely strip an environment in the pursuit of riches. The landscape still reveals the damage, although covered now by kudzu, that was done by the mine pumping out sulphur and other toxic chemicals into the environment. The damage done to the miners was much better hidden. I was unable to locate a “cancer map” for the area. I guess since the mine shut down in the 1980’s, the data may have not been collected, or lost.

I do have a personal bit of data that I can share, though. My great granddaddy John Waller died in the mine at Copperhill. As the story goes, a support timber cracked and he stayed behind to physically hold the timber while others escaped. Granny Waller moved in with Grandpa and Grandma Lite and added her farm to theirs. I was staying on the farm with them when I first heard the song “Big John”, by Jimmy Dean. Lest you think I misremember my facts, the story of Grandaddy Waller was known to me long before the song came out. It was just kind of an audial deja vu to hear it being sung.

Let me finish up by saying to workers everywhere, enjoy your day. A day off is not enough, but with diligence and focus maybe someday we’ll have it as good as workers in other countries, like, I dunno, France.

Send Invite To Join In